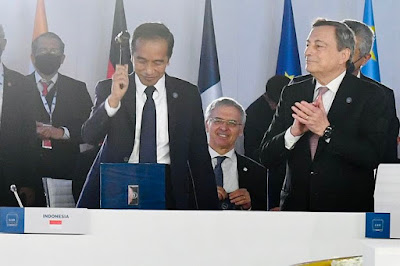 President Jokowi explained that Indonesia's G20 Presidency will encourage joint efforts for world economic recovery with the big theme "Recover Together, Recover Stronger". Inclusive, people-centered, environmentally friendly and sustainable growth is the main commitment of Indonesia's leadership at the G20. “The G20 must be the motor of ecosystem development that drives this collaboration and innovation. This is something we must continue to deepen in our future meetings,” he explained. On that occasion, the President directly invited the world leaders who were present to continue the discussion at the G20 Summit in Indonesia which was planned to be held in Bali on October 30-31 2022. “We will host Your Excellency and Mr. Bali's beautiful beaches, which inspire innovative ideas for future G20 productivity. See you in Indonesia. Thank you," he said. His year-long presidency, which officially begins on December 1 and ends on November 30, will culminate with the G20 summit on the island of Bali in October 2022.

The High-Level Conference (Summit) of countries that are members of the G20 group or the Group of Twenty has been held in Rome, Italy, since October 30-31. Indonesia is one of the member countries of the group of countries with a large economy. Therefore, President Joko Widodo accompanied by several cabinet ministers flew to Italy to attend the meeting. The following are a number of things that happened at the G20 Summit related to Indonesia:

In his speech at the first session, Jokowi invited all state leaders to prepare a global health architecture to increase resilience to pandemics and other shocks in the future. To make it happen, Jokowi said there are 3 things that must be considered. The first is the development of a global health resource mechanism. This includes funds, vaccines, drugs, medical devices, to health workers. The second is that each country's leaders develop global health protocol standards. Finally, the G20 is expected to be an important part of the solution to address the gap in vaccines, drugs and essential medical equipment. In the economic field, the President encouraged the leaders of the G20 countries to accelerate the global economic recovery. Not only restored, but also stronger, inclusive and sustainable.

Furthermore, at the side event session, Jokowi also gave another speech before the leaders of the G20 countries. His speech this time was related to micro, small and medium enterprises (MSMEs) and businesses owned by women. "Indonesia has more than 65 million MSME units that contribute to 61 percent of the national economy. At the same time, 64 percent of MSME actors in Indonesia are women. MSMEs have also shown high resilience in the midst of a pandemic," Jokowi explained. For this reason, he hopes that the G20 will continue to encourage the strengthening of the role of MSMEs and women through concrete actions.

3. The president's speech on climate change

At the G20 Summit, Jokowi also expressed Indonesia's desire for the G20 to be an example for other countries and lead the world in tackling climate change as well as real environmental management through concrete actions. Jokowi gave an example of what Indonesia has achieved in this regard. "Deforestation in Indonesia can be reduced to its lowest point in the last 20 years. Indonesia has rehabilitated 3 million hectares of critical land in 2010-2019," said Jokowi.

Indonesia is lined up to hold the G20 Presidency next year for the first time. The leadership that was originally held by Italian Prime Minister Mario Draghi was handed over to Joko Widodo. To that end, the President also invited the leaders of the G20 countries to come to Bali in 2022. "We will host Your Excellencies and Ladies and Gentlemen, in an open space, on the beautiful stretch of Bali beach, which inspires innovative ideas for G20 productivity. In the future. See you in Indonesia. Thank you," said Jokowi in La Nuvola, Rome, Italy, Sunday (31/10/2021), quoted from the Cabinet Secretariat website. Indonesia will also focus on recovering the world economy after the Covid-19 pandemic. with the big theme "Recover Together, Recover Stronger".

5. Have a bilateral meeting

On the sidelines of the G20 Summit, Jokowi also held a number of bilateral meetings with leaders of friendly countries. For example with Australian Prime Minister Scott Morisson, French President Emanuel Macron, and Turkish President Recep Tayyip Erdogan. With Morisson, Jokowi expressed his gratitude for the vaccine assistance sent by Australia. Together with Macron, Jokowi expressed his appreciation for the progress of cooperation in the defense sector that the two countries have so far established. Meanwhile, when talking with Erdogan, the Turkish President expressed his intention to visit Indonesia next year which is expected to strengthen relations between Indonesia and Turkey.