Rivalry in Ideological and Demographic Struggle in French Elections 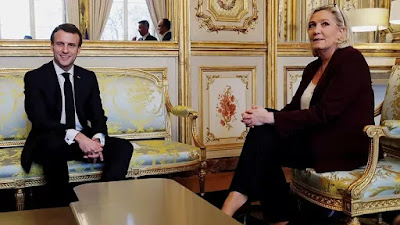 The first round of the 2022 French elections has been completed. Now, the battle has escalated again between incumbent Emmanuel Macron and the leader of the ultra-right National Guard party, Marine Le Pen. Macron and Le Pen's fight this time will be divided into two sides, namely demographic and ideological.

The results of the first round of the 2022 French elections held on April 10 showed a victory for Emmanuel Macron and Marine Le Pen with 27.8 and 23.2 percent, respectively. Meanwhile, Jean-Luc Mélenchon from the left-wing party La France Insoumise was in third place with 22 percent of the vote.

The fight is again tapering off between the incumbent Emmanuel Macron and Marine Le Pen.

Since there is no candidate with gains above 50 percent, the election will be continued in the second round which will be held on April 24. Bringing back the rivalry between Macron and Le Pen, this 2022 French election feels similar to the previous election in 2017.

Forever Emmanuel Macron of the La République En Marche Party! (LREM) and Marne Le Pen from the National Rassemblement Party (RN) to the second round of the 2022 French elections is actually not surprising. Since six months ago, these two presidential candidates have indeed occupied the highest electability ladder.

Based on the aggregation of the results of a survey of six pollster institutions in France, Macron's electability has always excelled in the range of 24-30 percent. Even though he finally caught up with an electability rate of 23 percent, Le Pen's road was steeper.

Five months ago, her electability position was 16 percent, not much different from other contestants, such as Eri Zemmour (14 percent) and even Valerie Pécresse (16 percent).

Meanwhile, Mélenchon, who finished third, seemed to be late in gaining momentum. Its electability in November 2021 to March 2022 only ranges from 9-11 percent. In fact, a few days before the election was held, he was able to boost electability to 18 percent.

Apart from these names, there are actually several participants who took part in the first round of the 2022 French elections.

In total, there are seven other candidates, namely Yannick Jadot from the Green Party (4.6 percent), Anne Hidalgo from the Socialist Party (1.8 percent), Jean Lasalle from the Resistons! (3.1 percent), Fabien Roussel from the Communist Party (2.3 percent), candidates from the far-right Debout la France party Nicolas Dupont-Aignan (2.1 percent), Philippe Poutou as representatives of the Nouveau Parti Anticapitaliste (0.8 percent) percent), and Nathali Arthaud from the Labor Party (0.6 percent).

Unfortunately, these participants never had a significant electability above 8 percent during the last six months until the first round of elections was held.

Territorially, it appears that the public's support for Macron and Le Pen in the 2017 elections has persisted until this election. Similar to previous elections, Macron managed to control the French area on the west coast with important cities such as Nantes, Bordeaux and Toulouse.

In line with the 2017 results, Le Pen managed to win the battle in the industrial cities of Northern France and the coastal cities of the south and east, with the exception of several cities, one of which was Lyon.

Unexpectedly, the Paris Metro area slipped from the grip of both Macron and Le Pen. This time, it was Mélenchon who managed to win the capital city and its surroundings.

In terms of turnout, Paris is not that big. In the 2020 regional elections, only about 500,000 people participated in this city.

Voters from the youth group became a battle area for Macron and Le Pen.

When compared, this figure is only 1.5 percent of the total permanent voters in the 2022 French elections. Even so, the cultural influence of this capital city cannot be underestimated because it can influence the choices of other regions.

From a demographic perspective, the youth group is now a battle area for Macron and Le Pen. In this fight, Le Pen seems to have a more stable position than Macron. This is because the votes in this age category tend to be dominated by Mélenchon and Le Pen in the first round of elections.

Based on data from Harris Interactive and Ifop, in the 18-24 year age category, more than a third are held by Mélenchon. In this age category, only 21-24 percent support Macron. In fact, only 19-21 percent of the 25-34 year age group voted for the incumbent. The difficulty of capturing the hearts of this young man makes Macron's position in terms of demographics tend to be narrower than Le Pen's.

Until now, several candidates who were eliminated have made their choice. At least three candidates have steered voters to support Macron in the next election round. The three candidates are candidates from the left-leaning party, namely Valerie Pécresse, Yannick Jadot, and Anne Hidalgo.

Not only explicitly, there are other candidates who support Macron in a more subtle way. Some of the candidates who chose this method were Fabien Roussel, Philippe Poutou, and Jean-Luc Mélenchon.

Although these three candidates did not directly say they would support Macron, they explicitly rejected Le Pen's future becoming French President. The flow of votes from left and center-left party candidates to Macron further demonstrates the closeness of the LREM to the left axis that used to dominate French politics.

However, not all left-wing candidates gave their support to LREM. This is because Nathalie Arthaud of the far-left Labor Suffering Party (Lutte Ouvrière/LO) directly declared for abstentions in the second round of elections.

“Macron if elected will do what Le Pen did. Le Pen if elected will become Macron, but more authoritarian towards migrant workers. We are forced to choose between two hostile people," he said via his official Twitter account.

With the highest electability, Jean-Luc Mélenchon is considered to be the kingmaker of the elected President of France. Explicitly, Mélenchon did not express his support for Macron.

However, it can be said that he supports the incumbent implicitly when he openly says he refuses Le Pen to win and lead France for the next five years.

This makes Macron's position much more superior. In simple terms, Macron's probability of getting an injection of votes is 11.8–36.3 percent of the supporters of the eliminated candidate. So, it is certain that Macron will win if he can secure the votes of Mélenchon supporters.